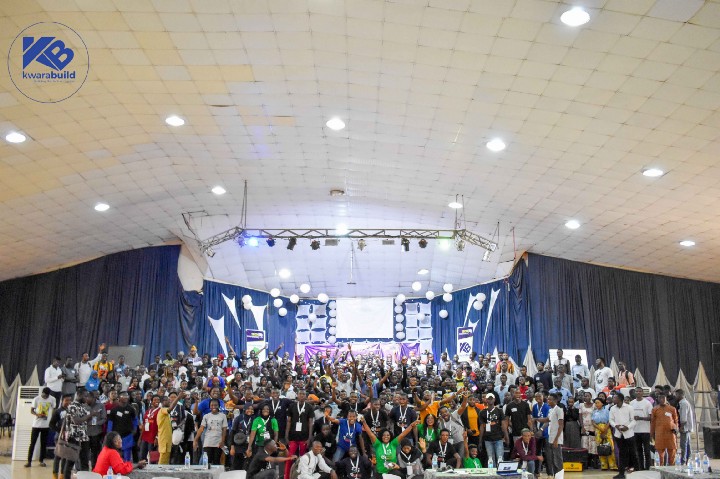 Kwarabuild is a team of tech enthusiasts and professionals building the largest Tech ecosystem in North Central Nigeria.

Having gathered the largest crowd in their first ever tech Conference with little resources and a huge last minute challenge, the expectation of all and sundry has been raised as to what the second edition of the Kwarabuild Tech Conference would look like, if there’ll be any.

However, the second edition of the Kwarabuild Tech Conference was a huge success as lots of improvements were made especially with the logistics and planning.

Over 1,300 participants registered for in the event from across the country as 16 speakers were lined up to speak at the event which was tagged ‘The Future of a Smart City.’

In the end, over 800 people attended the event with over 50 volunteers and organizers on ground to make the event seamless and remarkable.

The welcome address was made by the team lead, Kamaldeen Yusuf and the ice break by the Codeghost Ibrahim Zulkifli got the audience started after the electric MC had raised their curiosity for the event.

The first speaker Deji Komolafe @dejify who represented our gold sponsor at the event spoke in-depth on the opportunities for the youths in the Virtualize Africa program which is a VMWare initiative to raise intelligent Africans to fill vacant positions in the ongoing 4th IT based revolution.

Dr Mrs Yemisi Adeyeye who’s the MD and founder of Lifefount Hospital spoke about Technology in the health sector and emphasized that while technology is an enabler, it has it’s side effects. She also prescribed remedies for lowering the dangerous side effects of technology.

The Kwarabuild women in tech meetup came up to enlighten the ladies that several opportunities exist for ladies in the tech world and should not assume that Tech is meant for men alone. Various programs were thereafter introduced to them.

The event also featured sessions sponsored by the revolutionary smart city ride company, ‘Opay’, then and questions and answer session.

The second panel session featured the MD of Amugold Group of Companies and the founder of Tamirah. They discussed the future of work and they made it clear that even though robots are predicted to take over, there are still jobs that only humans can handle and skills set will play a large role in employment in the nearest future.

The conference ended with Tosin Ogunyebi the founder of Throne of Gamers coming to do an exhibition and small talk about AR/VR and how it can affect our future.

The attendees were treated to a nice show of what the future will look like and how they can prepare and align to the waves and currents of opportunities coming in the nearest future.

There were other side attractions like the red carpet, food vendors and giveaway by the Opay representatives present at the event.

The event ended but the organizers were not done yet so they met at the prestigious Noktel Hotel and Resorts to have a nice evening after party as well celebrate Zulkifli whose birthday was on the day of the event.

It was a time to relax, rejoice, review and reshoot in order to win always!

Don’t worry, if you missed this year’s conference, another is just on its way but the issue is that, it may be the one that’ll hold in Silicon valley so get your passports and Visa ready cause we’re going international!

Pics
Pictures from the event have been uploaded to kwarabuild, view the full album on Google Photos.

A dream achieved by all is a worthy contribution of everyone, we appreciate every hands that has contributed to the success of this event, our amazing team, volunteers, mentors, speakers and philanthropists. We say a big THANK YOU!

For more interesting posts, join our online community on the following platforms:

Special thanks to Olujimi Victor for anchoring KBTC19 and writing the official report.

KwaraBuild is a platform that connects people to the transformative power of technology, especially as it affects their daily lives. The future is now.

Join our newletters to stay up to date on features and releases.